In the aftermath of the global financial crisis, countries established a new ‘macroprudential’ policy framework explicitly aimed at safeguarding the stability of the financial system as a whole. In parallel, they overhauled their institutional architecture to accommodate the new framework. Although the changes to the architecture differed from country to country, in most cases central banks were given additional powers.

In the aftermath of the global financial crisis, countries established a new ‘macroprudential’ policy framework explicitly aimed at safeguarding the stability of the financial system as a whole. In parallel, they overhauled their institutional architecture to accommodate the new framework. Although the changes to the architecture differed from country to country, in most cases central banks were given additional powers.

This reasoning is wrong.

Financial stability is fundamentally different from price stability. It can only be defined negatively as the absence of financial instability, but we do not fully understand how shocks are transmitted through the financial system, how structural factors and network effects may amplify them, and how they may eventually grow into systemic instability events.[ii] For this reason, it is hard to translate financial stability into a practical, measurable operating target: the closest candidate, systemic risk, is not directly observable and the various proposed metrics are model-based estimates, not hard data.

Contrast this with monetary policy: the operating target for price stability—maintaining a single, well-defined aggregate price index close to a numerical target or within a specified range—is simple, clear, and measurable.

Even if the central bank were to be given responsibility for financial stability, it does not follow that it should enjoy the same degree of independence as it does for monetary policy.

How much independence? And for what?

‘Independent’ policy agencies, like the central bank, are ultimately creatures of the state pursuing public policy objectives.[iii] Furthermore, ‘independence’ is not monolithic but multi-layered, encompassing political independence (no government interference); goal independence (the authority of the agency to set its own policy goal); and operational independence (the discretion to select and use policy instruments). Rather than talk abstractly about ‘independence,’ it is better to think of specific public policy tasks that are delegated to the central bank (or other agency) and the appropriate principal-agent arrangements for each task.[iv]

So, should the responsibility for financial stability be delegated to an independent agency? And if so, what are the appropriate arrangements?

In their now-classic papers, Alesina and Tabellini outlined four criteria for delegating a policy task to an independent agency: [v]

Financial stability policy arguably meets the first of the four criteria: time inconsistent preferences are likely to make a credible commitment of politicians to financial stability extremely challenging. But it fails the other three: financial stability is non-observable, so it is hard to define ex ante clear criteria of success; social preferences for financial stability—the degree of tolerance for the risk of financial instability—are not well-defined and unlikely to be stable through the financial cycle; and many of the measures to contain systemic risk, such as limits on high loan-to-value mortgage loans, have significant distributional consequences.

Clearly, a different governance model is needed for financial stability. Not all decisions pertaining to financial stability can—or should—be taken at the agency level. Defining the objective, determining the level of risk tolerance, establishing accountability, and designing the institutional architecture itself are fundamentally political and should be mediated by the political process.[vi] Once these are settled, the responsibility to achieve the established objective may be delegated to the central bank (or other agency), together with the operational autonomy and resources necessary for this task, accompanied by a mechanism to hold it to account.

The Table outlines such a governance model. The four rows cover four key aspects of policy: design of the framework; prerequisites; analytics; and operations/implementation. The Table distinguishes between aspects that should be determined at the ‘political’ and at the ‘technical’ (agency) level. 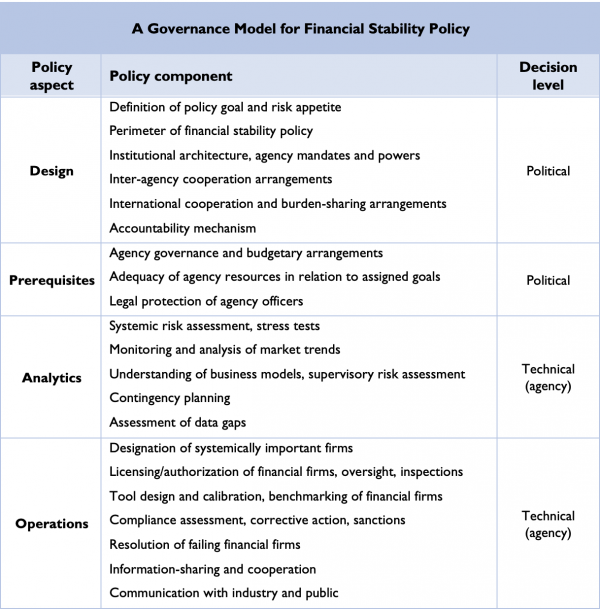 The financial stability policy architecture in the UK comes close to this model. The Financial Policy Committee (FPC) operates inside the Bank of England, but its powers and tools are subject to political oversight. The annual exchange of remit-and-response letters with HM Treasury also provides a degree of transparency and high-level coordination of policy objectives, including financial stability objectives, while ensuring the Bank’s operational independence. What is missing, however, is ownership of (and accountability for) the explicit goal of financial stability and the degree of risk society is prepared to tolerate in pursuing this goal at the political level: in practice, these are largely left to the FPC and the Bank to define. Instead, the government should take responsibility for articulating the policy goal and risk tolerance, for example, through an expanded form of the annual remit letter. Alternatively, the Treasury Select Committee could play a more active role in setting the financial stability goal based on input by the Bank—and hold the latter accountable for pursuing it.

Central bankers may see this as an attack on their much-vaunted ‘independence.’ On the contrary, tailoring the governance and accountability arrangements to the policy goal at hand ultimately protects the effectiveness and reputation of the central bank itself (or other regulatory agency involved).

In the rush to plug the gaps revealed by the global financial crisis—first and foremost the absence of an explicit financial stability policy framework—fundamental questions about the ultimate goal of financial stability and the right governance and accountability arrangements were sidelined. The haste to assign these responsibilities to central banks, combined with what appeared to be a preoccupation with preserving maximum independence, prevented a proper discussion on the right degree of delegation of the new policy functions and left central banks with a vague and politically contentious mandate. This inevitably triggered a backlash against central bank power and perceived lack of accountability.[vii]

The next turn of the financial cycle will put the current architecture to the test. Getting caught again as ‘the only game in town’ and having to face the inevitable backlash that would follow unpopular policy decisions may compromise the central banks’ ability to deliver not only their financial stability but all their policy objectives. To avoid this, the political system should take greater responsibility for the fundamental aspects of financial stability policy.

[ii] Financial instability has been defined as ‘any disruption to financial services caused by impairment of all or parts of the financial system that has the potential to have serious negative consequences for the real economy,’ with ‘financial services’ encompassing credit intermediation, risk management, and payments services. See Committee on the Global Financial System (2010), “Macroprudential Instruments and Frameworks: A Stocktaking of Issues and Experiences,” CGFS Papers No. 38 (Basel: Bank for International Settlements); FSB, IMF, and BIS (2011), Macroprudential Policy Tools and Frameworks, Progress Report to the G20; and IMF, FSB, and BIS (2016), Elements of Effective Macroprudential Policies: Lessons from International Experience, IMF Policy Paper (Washington DC: International Monetary Fund). A good discussion of the problematic theoretical underpinnings of macroprudential policy can be found in Barwell, R. (2021), “No model and no loss function is not a recipe for good macroprudential policy,” Macroprudential Matters, 27 September 2021.

[iv] Even in the case of monetary policy, the empirical investigations that have tried to distinguish between the various layers of independence found that while instrument/operational independence is important, political/goal independence does not seem to matter. See Debelle, G. and S. Fischer (1994), “How Independent Should a Central Bank Be?” in: Fuhrer, J. C. (ed.), Goals, Guidelines, and Constraints Facing Monetary Policymakers, (Boston MA: Federal Reserve Bank of Boston); and Balls, E. et al. (2018), “Central Bank Independence Revisited: After the Financial Crisis, What Should a Model Central Bank Look Like?” (Mossavar-Rahmani Center Working Paper, Harvard Kennedy School).

Tweets by @macroprumatters
Page load link
We use cookies on our website to give you the most relevant experience by remembering your preferences and repeat visits. By clicking “Accept All”, you consent to the use of ALL the cookies. However, you may visit "Cookie Settings" to provide a controlled consent.
Cookie SettingsAccept All
Manage consent